- Reveal length: This affects the portion to be revealed in the center wipe animation effect. Less part of the screen is shown as the values increases.

- Conceal length: Varies the concealed part of the screen.

- Gradient Size: This effect sets the size of gradient part of the screen. Lowering the value implies to smaller gradient size.

- Direction: Specifies the direction of the center wipe effect.

- Position: Specifies the starting position of the center wipe effect.

Animation effect which wipes the screen frame with rapid evaporation.

This effect runs a simple linear wipe of a layer according to a determined direction.

Using this animation effect wipes the screen with a pinwheel shape. The position and flip of this effect can be specified. 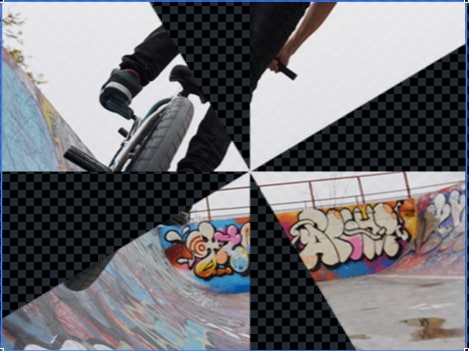 This is a curved wipe akin to the movement of a vehicle's windshield wiper.

Next: How to Apply Audio Effects