A good video is not complete without a soundtrack and, in this regard, audio editing is as important as video editing. FilmoraPro highlights a wide assortment of audio features which enables you to perfectly curate any audio you desire to add on your video's soundtrack. 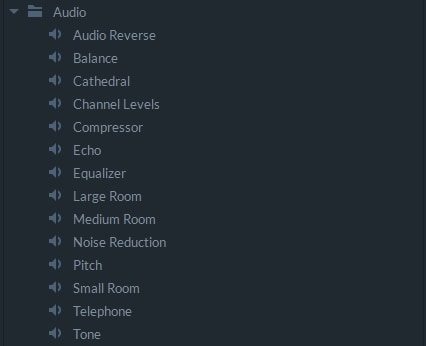 This effect empowers you to just play the audio file you have highlighted in reverse and, does not contain any controls associated with it.

This effect allows you to pan the sound from left to right. You do this within the stereo field of the project. Properties of the effect can be adjusted from the Control Panel once the effect is added onto the timeline. By default, it's set to zero indicating an evenly distributed sound on both channels. Setting to a negative value will pan the audio to the left channel, whilst the positive value will pan the audio to the right channel.

This effect replicates the sound effects to large venues such as cathedrals.

By adding this effect to the audio file makes it possible to independently adjust the overall volume of the right and left audio channels.

At times audio can be declared useless when the difference between the loudest and quietest points is large enough. The remedy to this problem is the compressor audio effect which scales down the peaks in the audio whilst maintaining the quietest sections be loud enough making it feasible to be normally perceived and, with the same magnitude makes the faint sounds louder under acceptable levels.

Applying this effect inputs echoes to the audio file. By accessing the Control Panel of the effects properties you can either select the number of echoes or how far removed them are from the source audio.

This effect is essential while curating the audio file because it involves adjusting the power of certain frequencies. Adjusting the said frequencies is dependent on the project you are working on and effect you are planning to achieve. Besides, multiple presets comes with the equalizer effect including Bass Boost or Low Pass and on leveraging on them aid in optimizing the effect faster. Also, on the contrary, you might adjust the values of the effect properties to customize them. 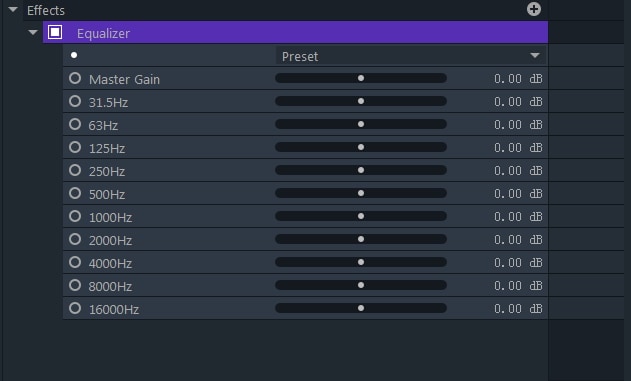 More often than not, those audio files uploaded into a project exhibit a low gain and you are supposed to monitor the default gain which can be seen from the software’s audio meter so that you can manage and conform to standards used in contemporary playback equipment. Keep on changing the Master Gain level each time you notice the file has peaked. For instance, if you find the dialogue file which peaks at -18dB being quiet, raise the Master gain to 9dB. By doing so the overall gain value would be up by -9dB making the audio more audible while still giving space for further volume adjustments if its of help.

This effect brings the ambient reverb of a large room. The reverb created in the Large Room lasts longer than the one created by the Medium Room effect.

This effect brings ambient reverb of a medium-sized room.

It is common to have an audio file which contains background noise in which it affects the audio file accordingly. However, this effect is a remedy which helps lower the noise levels if not to remove completely in audio files you are working on.

To use Noise Reduction feature, add the feature on to the timeline and place the playhead at exactly the point you want to get rid of the unwanted sound. Other interfering noises will affect the effectiveness of the effect accordingly. To increase the chances of the effect effectiveness, therefore, capture the atmospheric condition of the required locale either room or filming location before recording the dialogue.

Upon placing the playhead at the targeted location, continue by clicking on the Capture Noise Print button found on the Noise Reduction settings on the effects menu under the Control Panel. At this point, the software will automatically sample the project to be able to detect and remove the noise.

Detailed Noise Reduction options will be visible on the screen once the Noise Print is recorded by the software. Apart from the automatic remedy to clear unwanted sounds, you can as well use the following options and alter the noise reduction process.

This effect, when added on the audio file, will cushion the pitch change which usually comes up when you change the playback speed. Pitch effect can help you also to come up with high and low pitched sounds.

Small Room effect reproduces the ambient effect of a small room; however, recreated reverb is shorter than the reverb generated by the Medium Room effect.

This effect allows you to add ringing phone sound on the soundtrack of your video. 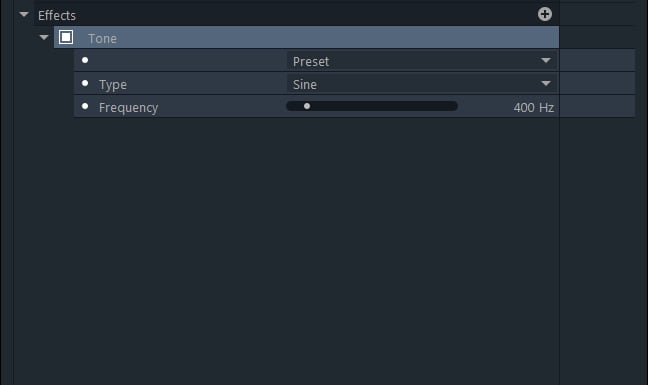 This effect makes it possible for you to maintain a continuous tone and a constant frequency on your project on the timeline. There are several tones to choose from on the Preset menu, whilst you select either Sine or Square from the Type feature. If you keep on increasing tone frequency makes it increasingly difficult to discern between Sine and Square types.

Next: How to Apply Blurs Effects to Videos