FilmoraPro trimmer panel is quite versatile as it makes the editing of video clips to be effortless. One can easily trim clips, set in and out points and work with the audio waveforms alongside other features with ease.

By trimming the clips, users can also modify how the clips get played in a specific sequence. Users can access the Trimmer Panel once they have placed media asset on the timeline and that can be done by right-clicking the video clip then choose Open in Trimmer. The In and Out points of the video clip then becomes visible on the timeline and you can immediately trim them after designating them in the trimmer panel. 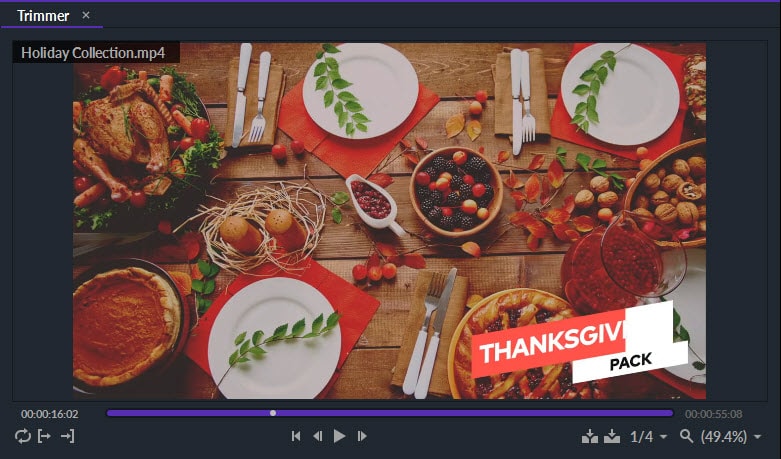 Just like Viewer, the trimmer features can be used for video playback. You can find the Playback Controls near the bottom of the Trimmer Panel.

Users can either decide to activate this feature on a clip and doing that will cause the video clip to begin playing right from the beginning (or the In Point) every time the play head reaches the end (or the Out Point).

The usage of In and Out Points are for performing different tasks within the different panels. Under the Viewer Panel can be used to define the work area on the timeline.

In default situation, both audio and video within your source media will be used, once you've added the media to the timeline. If you only want to use audio or video elements separately, following tools will help you to achieve:

Use Video Button: You can click on the Use Video button and move the cursor to a video track on the timeline, in order to add the video part of the media file.

Use Audio Button: By clicking on the Use Audio button and moving the cursor to the audio track on the timeline, you can easily achieve adding the audio portion of the media file only.

The location of the play head on the timeline will determine the frame that displayed within the Viewer and Trimmer panels. Therefore, users can control the play head from both panel.

Find the first frame option and you can easily place the playhead on the beginning of the timeline immediately. It's very useful for the long video projects. Using the Home key you can also activate this function with ease.

During trimming of the videos and audios, the precision play an important role. Here come the Previous/Next frame buttons. With the help of those two buttons, users can move through footage frame by frame with the aim of finding the perfect position for setting the In and Out points.

Once you click on the Play button the video begins to play forward in real time right from the position on the Trimmer's progress bar where the playhead is located. There are specific timelines that don't permit the real-time playback and, in such cases, the RAM preview or Pre-Render Features should be used if in case you want the footage previewed in real time.

Alternatively, you can also use J, K, and L keyboard shortcuts to control the media files playback on the timeline or within the Trimmer Panel.

Overlay Button: With the help of the Overlay button you can easily place a clip at the playhead's position on the timeline without moving all the existing media within the space to where the new clip is added, it gets replaced by the new clip.