This article list out the top 10 GIF making websites you might not know. You can make GIF images on them for free.
Try Free Try Free

Irrespective of your mood or requirement, probably a GIF is out there that displays how you feel. Nonetheless, there are possibilities that you might not find the exact GIF that you are in need. In such cases, it is possible to create customized animated GIFs. Furthermore, you no longer require technical skills or assistance from an expert in creating a GIF. The article discusses in detail about the websites that provide the opportunity to create animated GIF online. The best part is that you no longer have to pay. 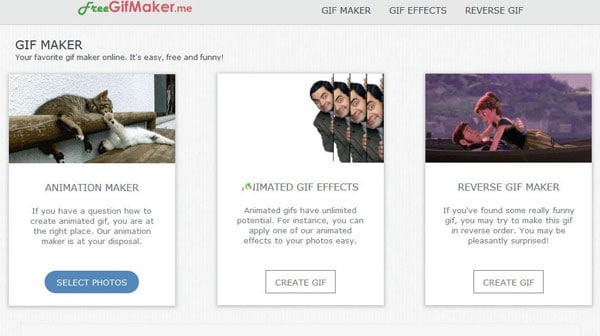 To use the free services offered by freegifmaker.me, it is important that you have at least three images. Nonetheless, it is also possible to add additional images as the application allows you to upload a maximum of 10 images. Additionally, it supports five different frames speeds. In addition to the standard GIF creation, the online website gives you the opportunity to create optional effects such as blur, Motley or Guggle and apply the same to the animated GIF. Other services offered by the application include YouTube to GIF and Reverse animated GIF. 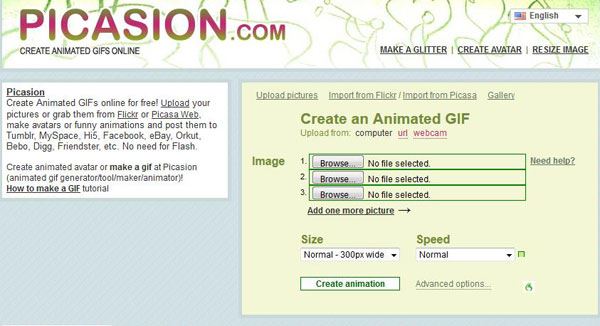 Picasion functionality and services offered are similar to that of freegifmaker. However, there is a slight difference in the user interface and appearance of the site. The software allows the user to upload images via the desktop. It further enables the user to import photos from Picasa web album or Flickr. Other services provided by the application are glitter effects, resizing an image, and creating an avatar. 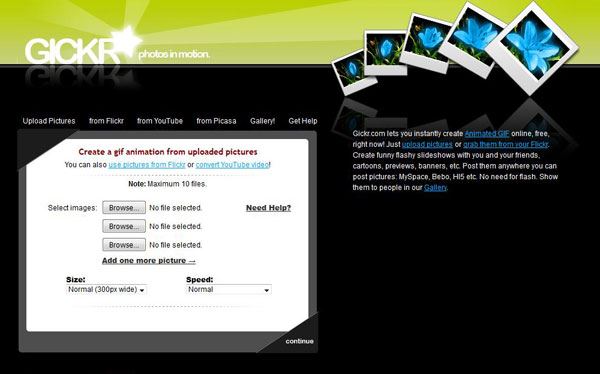 In the same way as other applications, Gickr gives the opportunity to create GIFs by allowing the users to upload a minimum of three and maximum of ten images. The best feature of this website is its ability to create not only a custom sized GIF but also vary the speed. This feature gives it a slight advantage over others. It is also possible to import images from Picasa web album and Flickr. 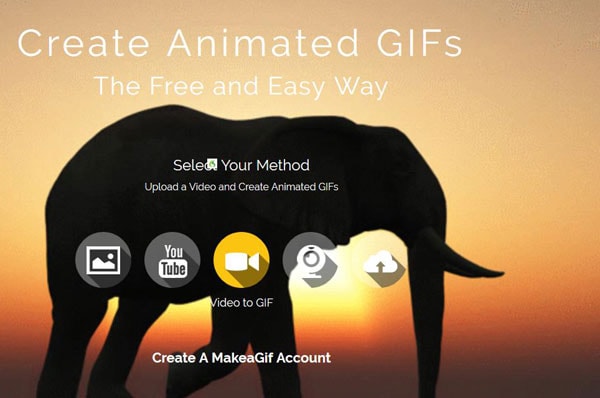 Sometimes, a few of the GIF creating websites take some time in uploading the images selected by the user to create a GIF. However, makeagif.com makes the entire process easier. Users can select multiple photos by holding the command key or the control key. The service provider also offers a gallery of animated GIFs that are funny, which are sure to enthrall and give ideas to those who are new to the creation of a GIF. Other services include YouTube to GIF, webcam to GIF, and video to GIF. 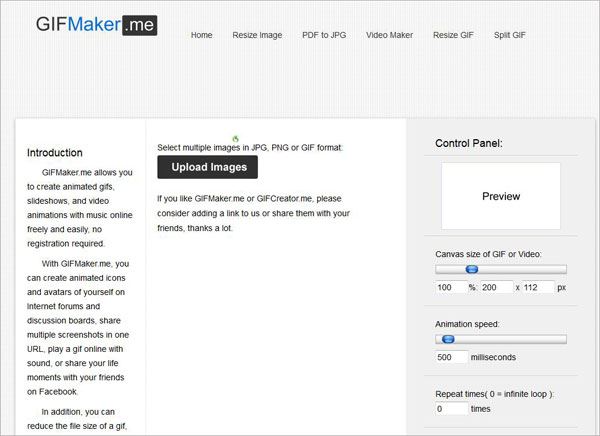 GIFMaker.me is a useful website for creating GIFs as it supports PNG and JPG format of images. The layout is simple and has the presence of a scrolling panel that gives the user a better control in creating the canvas size of the animated GIF and the speed of the animation. An interesting characteristic is the presence of the review panel, which gives an idea about the resulting GIF for the particular project. Other services include video maker, password generator, and GIF resizer. 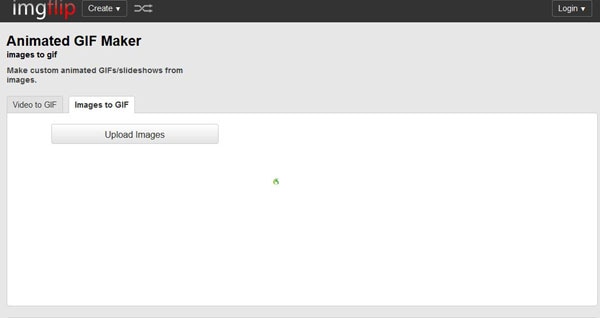 ImgFlip is yet another website that is capable of creating GIFs. It supports PNG, JPG, and GIF formats. The user interface is simple and utilizes a simple scroll panel that allows complete control over the GIFs delay time, height, width, and quality. Users can simply drag the images onto the website and rearrange the images according to the requirement before proceeding ahead with the process. However, the final product comes with imgflip.com watermark, which is only possible to remove by choosing a pro account. Other services include video to GIF. 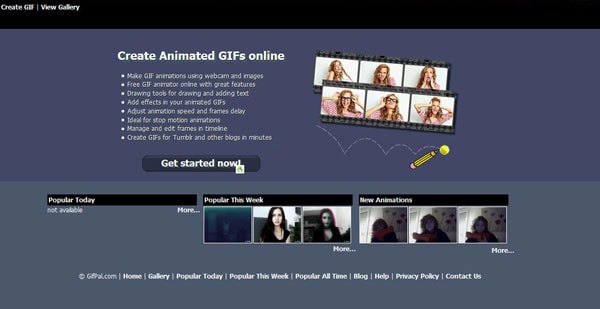 GIFPal is an incredible website offering plenty of functionalities that are similar to that of imgflip. However, it offers enhanced interface that makes it easy for a user to work comfortably in creating a GIF. The website also gives the user the ability to control contrast, hue, brightness, saturation of the GIF. It further offers a gallery of animated GIFs. Other services include webcam to GIFs. 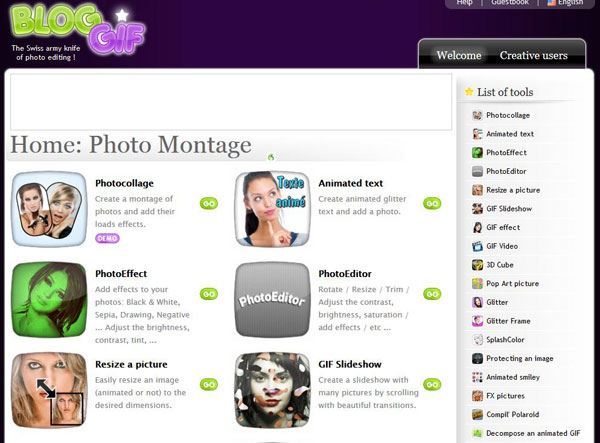 BlogGIF is a fun website as it allows the user to do much more than just putting images in creating an animated GIF. Other features include creating a slideshow of GIFs and adding effects to the final output. It is also possible to decompose a favorite animated GIF into several frames with the help of the tools provided on the website. It also gives the opportunity to capture pictures with the assistance of a webcam and create a mini-movie. 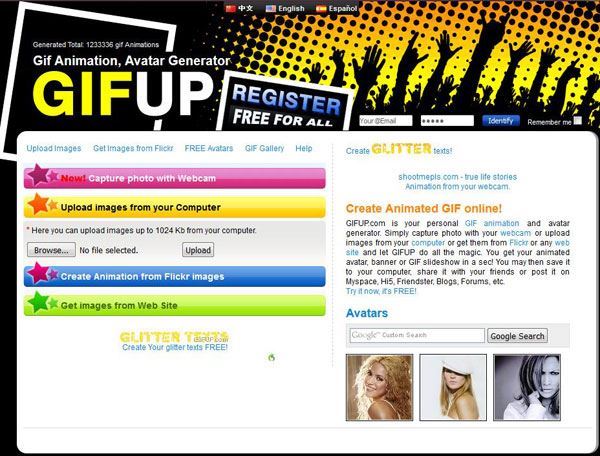 GIFUp provides all the fundamental functions that help in creating a GIF very much in similar to that of other websites. It is also possible to use, share and compare a GIF with that of Picasion and freegifmaker. An impressive feature of the site is the navigation, which is simple and to the point. Users can quickly upload selected images from the desktop, import from Flickr or any other website. 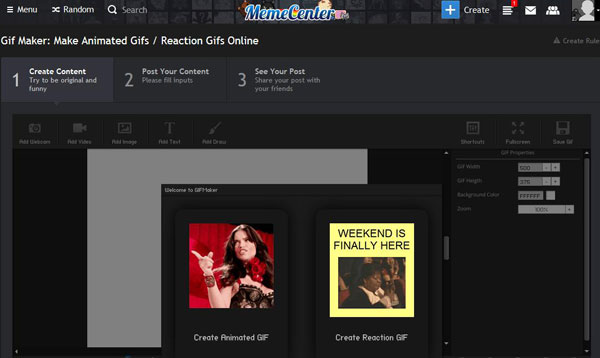 MemeCenter is very popular among individuals who are a big fan of memes. An interesting and the best feature of the website is that it has the best user interface in comparison to other sites in its category. Therefore, it gives convenience for a user to create a GIF with less stress. Additionally, the GIFMaker allows the user to insert brush strokes and additional text boxes onto the GIF, which helps in delivering personalized touch to the output.

The availability of free GIF creating websites over the Internet is giving the opportunity for all those who wish to create a funny, reactive, or any other type of GIF. The sites discussed in this article provide the opportunity for all those individuals to bring out their creativity and create a perfect or personalized GIF that fulfills the need. A majority of the websites allow users to upload multiple photographs or even import images from web albums such as Flickr and Picasa web album.

4 Tips on How to Cut Vimeo Videos Online