The idea of backup Android Linux has gained popularity over recent years. It is due to the fact that the number of users with Linux OS is increasing with every passing day. Though it is easy with the windows OS to get the work done but for the Linux users it is not at all easy as there are several third party tools that are necessary to get the work done. On the other hand the users of the Linux OS want to make sure that the idea is applied so that they can back up their phone with relative ease and satisfaction. For the users who want to back up their Android phones using the Linux OS are advised to read this tutorial to get the things done in right manner.

Relationship of Linux and Android

Until yesterday both of the open source projects were considered to be different. However in the wake of advancement in science and technology it is important to note that the users get the basic tools and techniques that can be applied to get the work done. It is also to be noted that the users need to make sure that the command line interface of the Linux is used to get the work done. In other words the Linux developers have now developed the tools to ensure that the work is done easily. These tools are not easy for a novice user but still they can be used to back up the phone. Linux and Android therefore has an unforgettable relation. It is to be noted that the development of the Android is done using a Java based interface. Down under each and every Android phone is a Linux phone actually. It means that the user needs not to worry about the strong relationship. It is Linux that actually handles the keyboard input, multitasking and keeping data within the RAM. This idea therefore ensures that the user gets the best idea about the relationship of Android and Linux. The Linux Torvalds is a program that is now integrating the Android programming as well. It means that the programming will get faster and therefore the Linux based tools will also be used by number of developers. Getting this idea also means that the Android will be backup using the Linux tools with ease and satisfaction. This collaboration will take time as every company has its own priority but it will be surely launched.

Command line interface is an idea that has been long forgotten. It is for the same reason that the users now prefer the windows interface over the Linux. But the ones using the latter OS are very contented with it. A majority of users are using the Android phones and Linux OS together. This tutorial is for all those who need to make sure that the idea is not a problem at all like Android backup over the Linux. The complete process is as follows.

Step 1. The Android ADB for Linux is to be installed first of all. The interface is something as follows. The following command is then to be run once the installation has been done.

Step 2. The USB debugging within the settings is then to be clicked onto the Android phone. 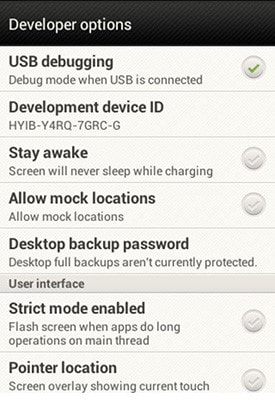 Step 3. To start a backup within the ADB run the following command:

Now unlock your device and confirm the backup operation

Step 4. On the device if there is a lock code then it is to be entered. After this the Backup My Data button is to be pressed. 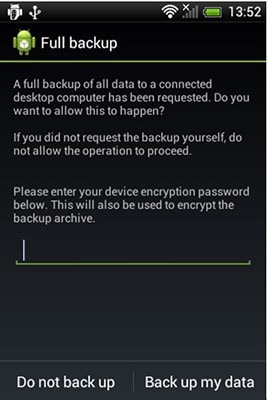 Step 5. Once the backup has been initiated you need to wait till it has been completed. This also ends the process completely. 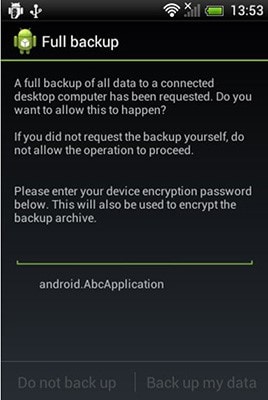