Setting up a new device requires download the apps and building the content right from the scratch. People holding onto huge data in their devices will think twice about upgrading to a new device. Even if they did, transferring the data to a computer requires the use of software preferred by the phone manufacturer, and the same may not offer compatibility in recognizing data created by another program. For a few people setting up their new device is fun, as it gives them the opportunity to explore the options and the features present. However, most of the users who wish to use the handset with ease and without causing any trouble would feel a headache when they require copying the content. If you are among them, then this article is for you. Learn about Samsung transfer app that allows you to move content from one gadget to another without worrying about the operating system. The cross-platform programs give the chance to move content regardless of the device, the operating system, and phone manufacturer. 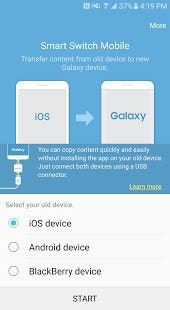 Smart Switch from Samsung (Galaxy Note7) eliminates the painstaking procedure of moving content to a computer first and then transferring it to the new device. Additionally, the traditional method does not allow app movement. With the Smart Switch app, users can quickly copy content from their old device along with apps and their data to their new device.

The app is capable of moving content from Android device to any other device running on the same platform, or a different operating system such as iOS, Symbian, and Blackberry. The app is further efficient in importing content from iCloud and iTunes. The app supports multiple devices currently in the market running on different operating systems. With a single click, you can begin transferring all the data from your existing device to the new gadget that you purchased. You do not have to experience the pain of copying data to a computer first and then get it onto the new smartphone. 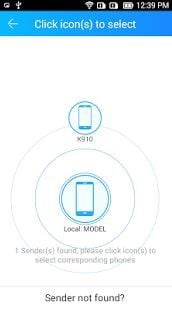 CLONEit is capable of cloning twelve different variants of mobile data from one mobile handset to another device. The best element of the app is its ability to clone the data on an existing device in two easy steps without requiring for a cable, a computer or a network. The app allows you to clone text messages, call logs, contacts, applications, app data, all the content on an SD card, music files, videos, calendar, and system settings. The transferring speed is 20M/s, which is way above the transfer rate of Bluetooth.

Users do not have to worry about personal information leak because the app works offline, that is, without any network or internet. Due to this, you can have the assurance that the app is only moving the content without creating any backup of the data. Apart from moving data, it is even capable of allowing users to uninstall pre-installed apps and even clean the system to release space. All it requires downloading the app on both the devices and begin the transfer process. You just need to follow the on-screen steps to copy or clone the content and move it to the new device. 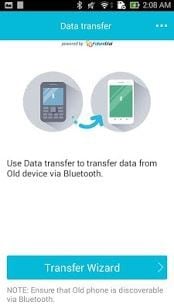 Data Transfer, as the name implies, is an application that allows you to move content from your old phone to a new phone over Bluetooth. With the help of the application, users can transfer their content with ease. All they need is the application and Bluetooth connectivity.

With the use of the application, it is further possible to move the contacts and messages from a non-smartphone device to a smartphone device. The option provided is a boon for all those users who are shifting to a smartphone for the first time and do not possess substantial knowledge about the techno-world and apps. The application will guide you through the process, which makes it easy even for a beginner to use the program to transfer data from one phone to another. 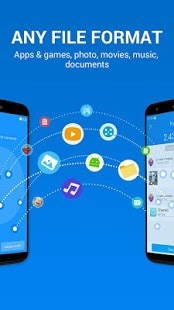 SHAREit is the fastest file sharing and transferring application for all the mobile operating systems. The best feature of the app is its ability to share any file anywhere and at any time. The fastest transfer speed is its real attraction, with over 200 times the rate of the traditional Bluetooth. The program does not require any internet or a cable to connect the devices. It just transfers the data from one device to another. There is no network restriction, which makes it a useful application for people to transfer data irrespective of the operating system, the device, or the network. As there is no restriction, you are free to send any record, image, music file, app, or just anything to your new device or your friend's phone in simple steps.

The app also provides you the chance to transfer the content from the phone to your PC. The additional features include control of the photos and music on the computer, along with playing PPT with the help of the device that you are using. Apart from transferring content, you can also clone the data from one device to another in a single click. You will have the same data without any loss. 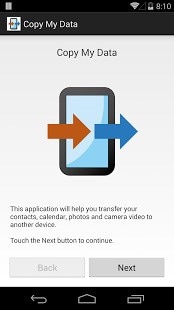 Transferring or copying data from one device to another is the easiest way for anyone. It is indeed a boon for people who are using multiple devices and would like to sync data between the device regardless of the operating system. Copy My Data gives the chance to copy the content with ease over a Wi-Fi connectivity. With the guidance of the program, users can copy contacts, images, videos, calendar, and more. Upon connecting the devices, which are present on the same network, the app will guide the user to proceed with the easiest transferring process.

Users with no technological background also find using the app a boon due to the simple operating functionality. The application provides the details about the process so that even a beginner can understand how to initiate the data copy procedure.