What is a Camtasia screen Recorder?

It is a multipurpose screen Recorder that lets you record a video of whatever part of your computer’s screen you need, whether you need a video of a full desktop, windows or even specific regions of your screen. This software makes your work easier by letting you record whatever you need and as if that is not enough, it gives you a benefit of editing your recording. It enables you to import and edit the audio and the video separately. It will then help you export the video in different formats such as MP4 or AVI.

Wondering how the Camtasia Screen recorder is used? First, you must install the Camtasia software on your computer.

First, you should choose the content that you want to record, whether it is in Microsoft excel, Ms Word, or even on the desktop. When you click on the "Record the screen" button, it will give you the option of either to record the full screen or either to customize it to a smaller size. The better option is to customize it to give you a better view of what to record 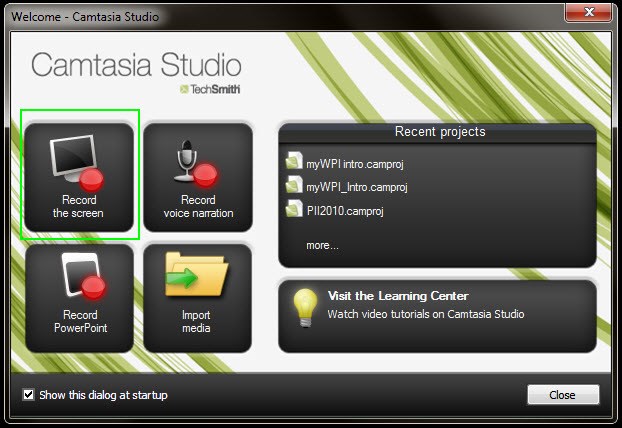 When you are done recording you will get a preview window of what you recorded. This is where you have the chance of editing the recording to your suited needs, to get the perfect content to serve its purpose.

You can save your content appropriately by choosing a name for it and save it in your desired location.

Apart from Camtasia Screen recorder, did you know that there is software that plays almost a similar role? Ever heard of Filmora? Filmora Video Editor gives you the option of recording the desired portion and size of whatever you want to record just like the Camtasia screen recorder, gives you the option of editing it to your satisfaction. You can record Skype chats, YouTube videos, internet tutorials and even conference meetings.

As usual before mastering the art of using the software, you have to install the software in our computer first. The following is step-to-step guide on how to use Filmora Video Editor.

First, you have to select the part you want to record on your computer. Filmora will also give you the option of customizing whatever you want to record. You can record the full screen or choose a smaller part as long as you getting the best of what you need. If it is a recording that is meant to be uploaded to the internet, it is always advisable that you customize your recording.

Secondly, consider whatever you are going to record. If it is a YouTube video, a movie or music from a site such as iTunes for example, you will only have to click "System audio" button. You don’t need interference from the noise contributed by the microphone most probably. That will ensure you get the best of the recording. Contrary to that, if you are recording a Skype chat or rather a one-on-one lecture, you will have to click on both the "System audio" button and also the "microphone" button as well.

Lastly, you can save the recording by clicking on the "Export" button and then choose a desired name for the file. You will be probably good to go. You can now upload your recording or use it for whatever purpose you want to. Pretty impressive, right? Now you know.