Each individual tries to make his/her device with music for enjoying anywhere, whether it is Android based or iOS devices. Sometimes faces built in bugs, spyware like problematic issues with those devices having incompatible music players. A list of top 10 Apple Music player for iPhone and Android has been presented below comprising of their fascinating functionalities. 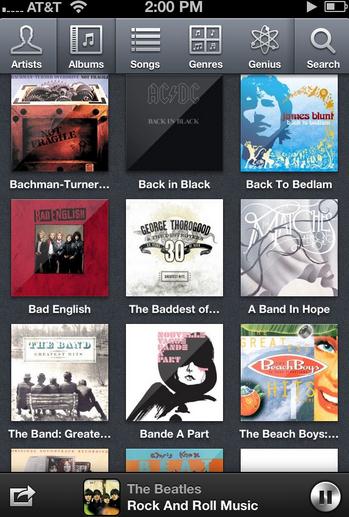 Most featured and considered a best Apple music player app for iPhone. Beautiful and vivid designing for that software application. It has nearly all the built-in functionalities that a music player should have with it like lucid and elegant user interface. Enables the user to control his own desires that how he want to use it. Used by the millions of people through the entire world and still is being used by them. Therefore, delivers its great properties to the end user so that he can get a profit of that music app.

Providing a simple interface design ensures of using it with simplicity and its other integrated characteristics are like giving the library of music tracks for you to add them manually or it locates them automatically also. Also enables to connect to Twitter and share there with the colleagues. Shuffle the tracks, seeing lyrics and now playing the song are its features too. 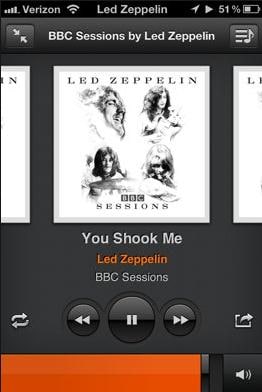 Initially, with this Apple music player for iPhone according to its fame in the world because of its working capabilities, it has achieved its own status among the other music players of the music industry. As affiliated with Microsoft then after coming built in with Windows 10 it has earned enough fame. Coming up for its features, it has inspired the DJs around the entire society because of its quickly picking learned algorithms for tracks. Its programs have enough work with it to at least think of it when going for music players for iPhone devices.

Another enormous quality of this Apple music player, organizing the library with own desires, let the people make their own mix collection of music tracks as everyone listens according to his taste. Makes the people allow with gestures easily to operate and handle the bunch of different category music songs. Last one great function that also contributes making it better is to connect to iTunes and streaming with Apple TV. 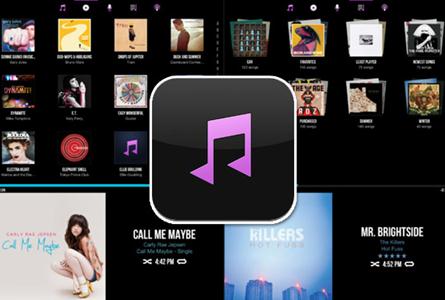 With Car Tunes, great functionalities with itself and an old one music player app that allows the users to use by simply their gesture using abilities and getting their desired collection of songs on in front of their interface screens but still is enough to impress a man who uses other apps instead of it. Another its powerful capability is facilitating the user with its full-screen artwork albums with it.

The users can use it according to their own choice of taste by gestures, may share their tracks on twitter, and manage their collection of libraries with the ability to see some advance features in it. 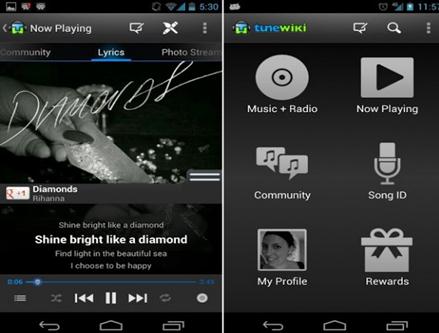 Have any information on about Shazam, which is the lyrics rich music player app. Can say like that TuneWiki provides the facilities to its end user and powerful feature is that it is to recognize the voice of song. Gives the lyrics by its voice recognition and helps the user to make more comfortable with it.

As due to having some amazing features that it allows the user to get more knowledge about the track and its album. After that, synchronization is the enduring quality of that software application that makes it one of the most usable music player apps for iPhone. Word widely it is used, available on app store make the users get through it for once to try it for their music collection. 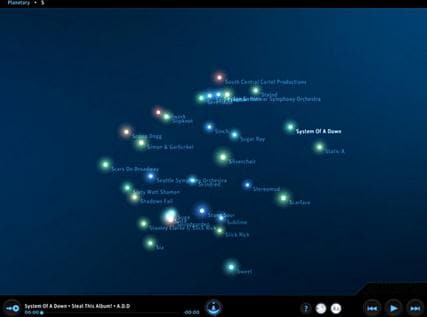 At the last of the row it’s a Planetary Apple music player used for iPad, may or may not be available on the app store, but has its own functionalities that put it from the crowd as it make the playlists of song collection on it automatically or manually also can be organized but its default set of management put the tracks alphabetically and then these are highlighted by having a star with them in the list.

As far as its interface is concerned, then it has the elegant and beautiful screen for the users. For all the iPads, it is being used, can have different functionalities by the customization property and can get the expected outlook and its internal working as well with the equalizer. The given link can get the appropriate page to download it for iPad. 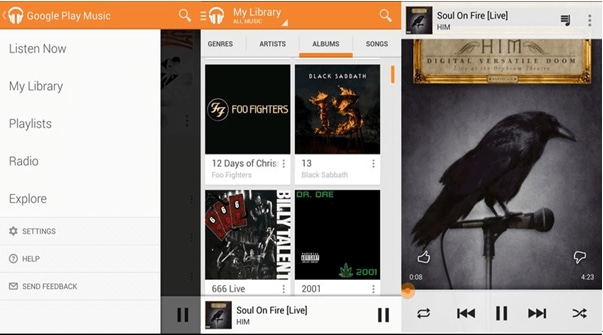 Just starting with the first android player that is considered and come in a row for usage and adaptability. Interesting thing to know about it is that the old one that was used in place of it before its birth has been now replaced by it and it has some more impressive features for its users and less problematic in usage. Quickly turning to its some great properties, then one of them is to stream the musical services, comes with the quality of having the lock screen for it.

From its outside look and interface, it has the orange and white color design that invokes the user to try it for free. Some more abilities come with it if is purchased for a month by some amount of money. Otherwise, its default version that first comes in the store is for free.

If there’s an internet connection with the device having that player than it has the capability to start instantly radio. One of the main features of it is that it brings ads supported version and is integrated already in the android mobile devices. 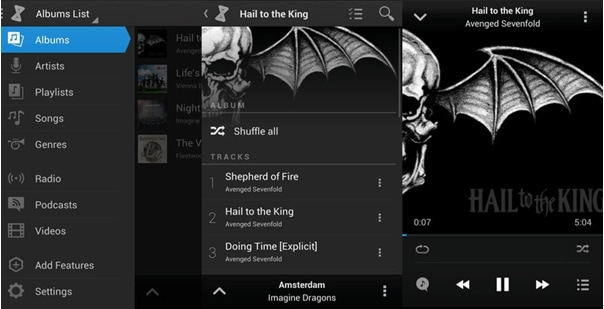 A new featured and originated in some years, but due to its some great full features it stands out from the entire collection of world renowned music player applications. Owing to its powerful, vivid as well as pretty looking interface, it has pulled the audience towards it and the essential part of its user interface is smoothness.

Furthermore, looking into its internal built in characteristics, then it has the podcast management system. The equalizer that makes the modifications in the musical composition of tracks. Synchronization with iTunes is also some kind of its best feature. Not only this, it can also help to make streaming the multiple devices like XBOX, PlayStation, and PSP etc. Available on the Google app store for free and can be downloaded from everywhere. 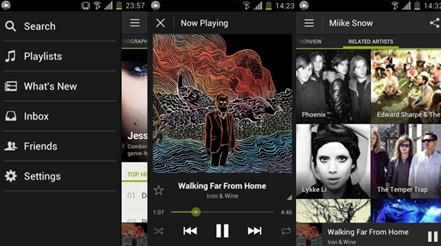 That app where is concerned then comes most after the most standard musical player app. Can help making a large collection of tracks by downloading if having no issue with the storage memory of the mobile device. It can be taken also as a media guide that indicate the user to get music libraries from the internet.

Offers a number of key features like a good sound quality, uninterrupted listening, and offline music plus ads free app. Comes with the sleek design of interface and smart looking to stream the tracks with no hindrance. Also available on the app store with free cost. 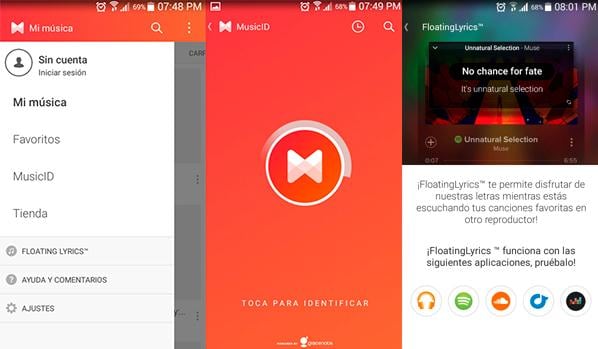 Where it comes from the music player for playing audio tracks for the Android devices, then it is also a suitable choice to have with. Advance feature for it is displaying the lyrics of the audio track by sound recognition algorithm. It has its own database that creates the lyrics library for it. Can have a great fun to try with that kind of music app on the mobile device.

Its interface allows it to create the albums according to user’s choice. Another great function in that is like scrabbling like some music apps provided at the store. It has the ability to recognize the track also but not able to locate its memory position. 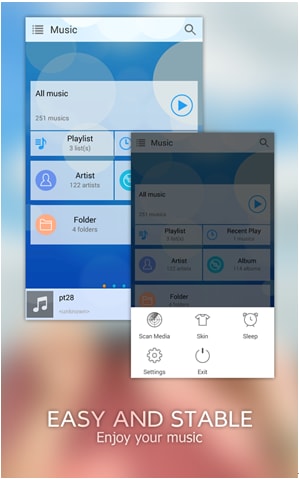 Last but having powerful features like it has an equalizer, can access to audio files. Gorgeous interface with a pretty much interface to use with ease guides the user to improve the tracks playlist as well. Moreover, with the help of that user can manually locate the audio files and set them in the album.

Looking at the world’s renowned Apple music players it seems that each software application comes with its own features and functionalities which make this stand out from the crowd of hundreds of software like it. Those are the essential qualities for them to earn fame.

[Tutorial] How to Merge MP3 Files in iTunes?