Want to know the best and easiest muxic mixing software? This article introduces you 7 popular audio mixing and editing software. You can choose the best to strat your mix.
Try Free Try Free

Mix music is a collection of individual tracks in a recording blended together to come up with a version of the song (Mix) that sounds as good as possible. This is a vigorous and rigorous process which requires a bit of skill and creativity to produce a perfect result. Once, if yo want to learn or try to mix music, you may need a lot of different equipments for mixing music, even a studio mixing desk...

But now, excellent music mixing softwares changed this fact. An ambitious DJ or any upcoming artist can learn how to make a music mix and practice more frequently by using a audio mixer software.

Therefore, there is a need to access the right software to reap the best results. In this post, I picked 7 best sound mixer softwares to help you strat mix music in a easy way.

Filmora Video Editor for Windows (Filmora Video Editor for Mac) is a robust and reliable DJ software to mix music for beginner. Regardless of which version you running, they share a duplicate feature and general exciting experience. Apart from being a sound mixer software, there is more it offers as a video/audio converter, rip audio from video, import file from camcorders, external drives, and smartphones. Moreover, it has an intuitive user interface which assures few or no difficulties while carrying out some actions in it.

The following are main Filmora Video Editor features as an audio mixer and editor:

The following is a step by step guide on how to mix music using Filmora Video Editor.

Launch Filmora Video editor on your computer. If you haven’t downloaded this music mixer software yet, go to its official web page and follow the link to download Filmora Video Editor after which you click on its icon to open it.

To import audio files, click on the “Import Media Files Here” icon.  Another method on which you can import the files is by using the “File” tab route. Click on the tab and select “Import Media” and keep an eye on the onscreen guide to have it done. Furthermore, as an addition import option, drag the audio files and drop them on the program prior.

At the moment you are okay with the audio files on the Program’s Media Library, you are ready to mix music on Mac. Simply click on the “Audio Mixer” button on the toolbar to access the “Audio Mixer” tool in this music mixing software.

The Audio Mixer feature will be displayed on a pop-up window. On this very same Window, you will find your imported tracks highlighted in purple. Take turn to each track by using the cursor to either spin the small circle or by clicking on the “Master” button to lower the master volume or raise it higher. At the moment you are done with the settings, tap the “OK” button. 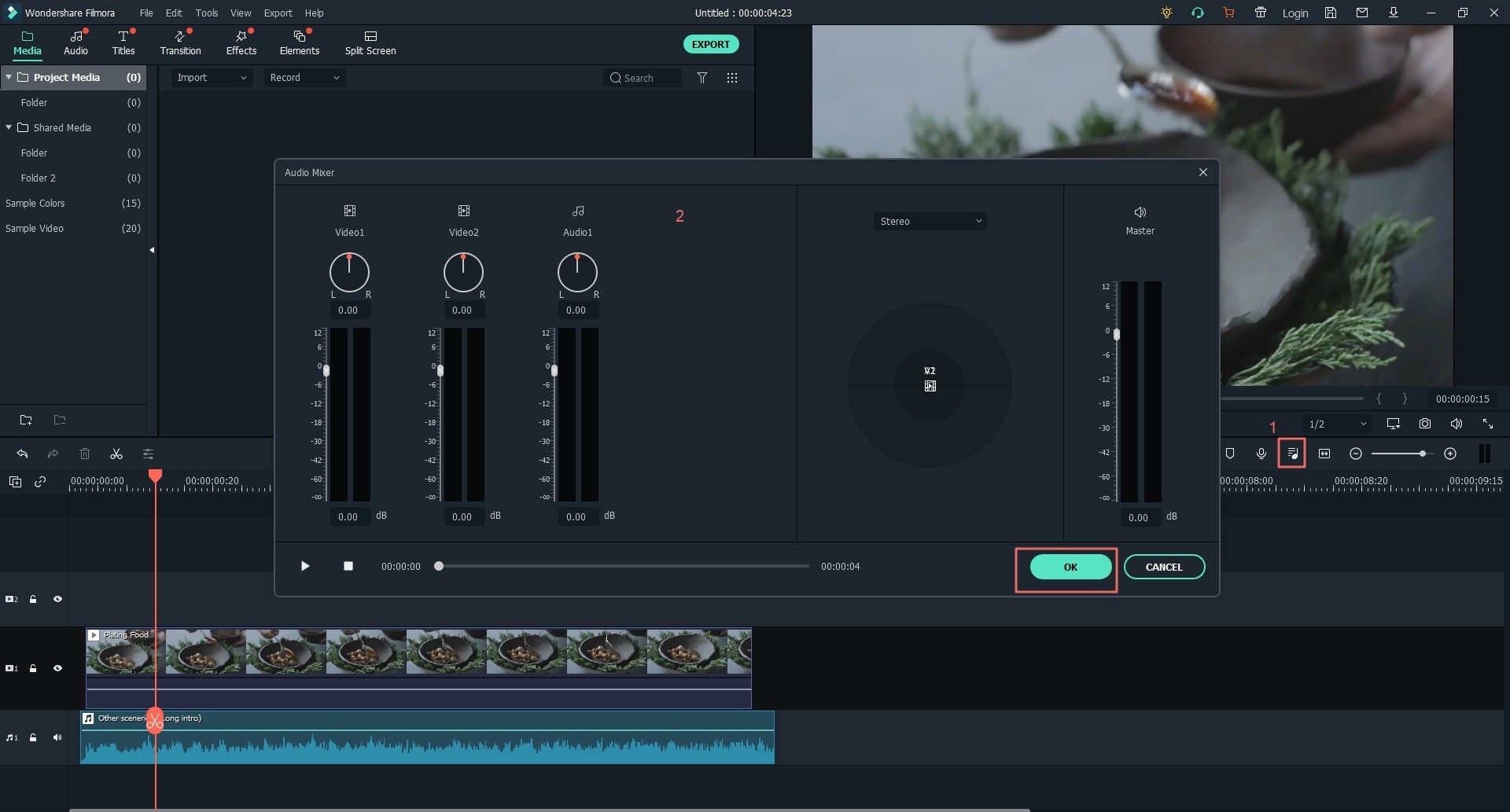 To export files, click on the “Export” button and select appropriate save location from the export window. Key in the name for the mix music you have created and choose the preferred output format from the drop-down list. Alternatively, you can as well share your audio mix project directly to social media platforms, send to YouTube or Burn to DVD.

In addition to the advanced music mixer for Filmora Video Editor, the following are the description for the 6-audio mixing for Mac or PC together with their respective pros and cons. 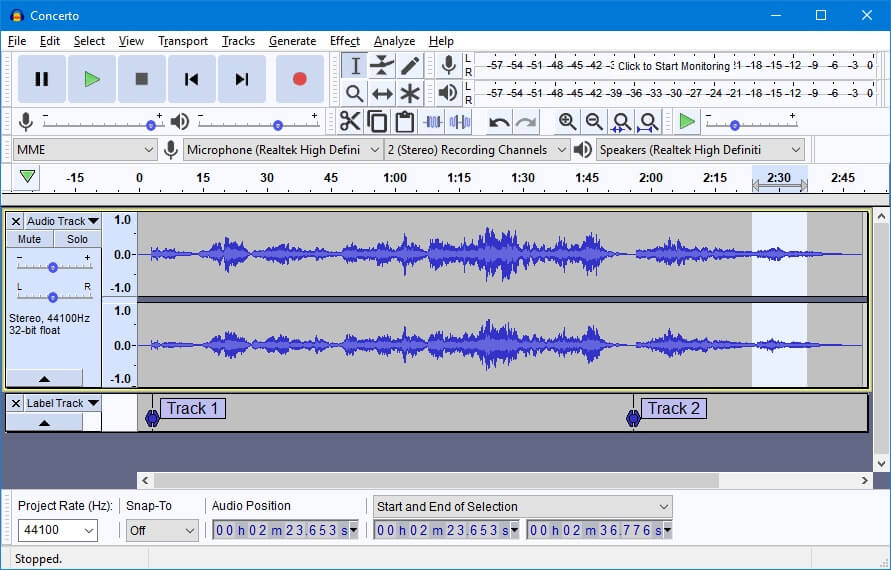 Audacity is one of the commonly used sound mixer software that is both free and open source. It brags with its’ simple and easy to use user interface which auger well for both tech-savvy guys and the novice individuals. However, contrary to the fact that this music mixing software is simple and easy to use, it comes with almost all the professional Supported Operating Systems in addition to mixing music tracks which include multi-track editing, live recording, ability to convert records and tapes to digital formats, noise and vocal reduction, and more.

- The software is absolutely to use and open source.

- Available as a portable variant.

- The user interface is displayed quite to be dated and cluttered.

- A time it faces frequent crashes on Mac.

Mixxx is yet another open source sound mixer software which has a few similar similarities to Audacity. This program is cross-platform compatible. Whether you’re an amateur or professional DJ, the program has a good set of features to facilitate an exciting experience. Also, with audio mixer software- Mixxx, you can use it freely without the need for extra software integration. But in a case where you have any external hardware, it supports a Midi control. More features you’ll find from Mixx include wide range of a real-time effects; records your creation in OGG, FLAC, ACC/M4A, WAV, or MP3, BPM integration which automatically sync the tempo ofa couple of the songs, etc.

- Has a built-in time stretching effects 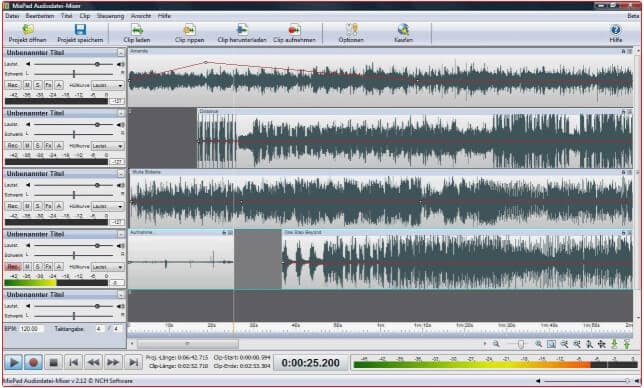 MixPad comes in the third spot of the music mixing software of this list which is only free for non-commercial use. Once you are in possession of this program you have the liberty of how to make a music mix from audio, music, vocal tracks, and as well concurrently record single or multiple tracks at the same time. Furthermore, MixPad offers free sound effects and a music library which are readily available for use at any instant. More actions you can execute with this utility includes using a built-in metronome, adding instruments and effects through VST plugins, either mix to .mp3 or Burn to a disc. 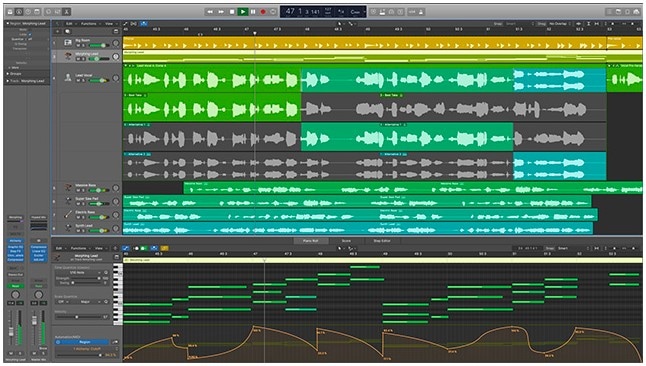 Obviously, Logic Pro X will not slip away from any list of creative music mixer for Mac. We could have made this the first choice on the list for being the Apple’s DAW, however, it’s only supported by Mac OS and this slices its accessibility by some folds because not every DJ has got Mac OS. It comes with all the basic tools you’ll expect from audio mixer software. More importantly, it instantly matches the timing of different tracks while mixing with the aid of “Smart Tempo”. Logic Pro X supports wide a range of audio formats like CAF, AIFF, WAV, MP3 among others.

- It’s rich with features and contains a variety of plugins.

- Comes with a ton of tutorials.

If you have ever experience Logic Pro X, you’ll notice that it is just an upgrade of GarageBand. They share most of the basic features and as well GarageBand is for Mac OS only. Its UI is the best amongst the software’s in this list; clean and each tool you require is accessible within just a few clicks. It features almost a complete instrument library cutting across almost all music genres. 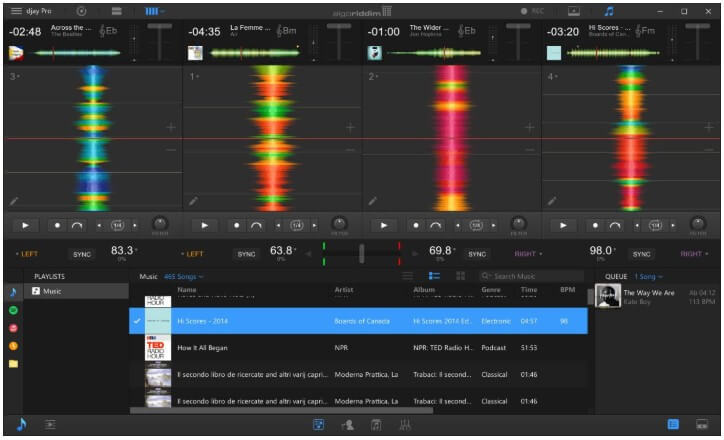 djay PRO comes last of this 6 best audio mixer software and it is the only one which is designed for Windows operating system specifically Windows 10. Contrary to its position, it isn’t inferior as you might assume, it’s a great sound mixer software which seamlessly integrates Windows Explorer, iTunes, and Spotify, enabling you to access hundreds of tracks instantly. More features from djay PRO are audio effects, high definition waveforms, four decks to mention but just a few.

Write in the end

We conclude this article by comparing these 7 audio mixer software.

So which one would you choose?

If you just want to mix music, you can choose one of the six audio mixer software you like.